To understand what a magnet motor free energy generator is and if they even work, we should first take a closer look at the specifics of energy and what a generator is capable of doing.

A magnetic motor (or magnetic energy generator) can provide electricity without having to use fuel. They are typically built with magnets and copper wire coils to provide a greener alternative to electricity. Now think back to science class and the chapter on magnets. Like poles will repel each other while opposite poles attract each other. Once the magnetic motor is started, it can be treated as a turbine that you can receive electrical energy from. Therefore, they are useful during power outages in the midst of a storm, for example. Most magnetic generators you think of in this type of scenario, however, are running off fuel. Now, think what would happen if you didn’t have the fuel: The generator simply would not run. This is where the magnet theory comes into play. 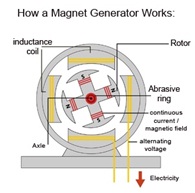 We all learned that you need a source to generate free electricity. The standard generators that come to mind use fuel as the output power, magnet generators are claiming to run purely off a magnetic arrangement.

Free electricity is an alternative energy source that is shown to be more efficient and cleaner than what we currently use. It is also a more affordable energy source. The law of energy states that the total energy of an isolated system remains constant and is said to be conserved over time. Energy cannot be created or destroyed. Instead, it is transformed from one form to another.

Perpetual motion machines cannot exist according to this law because no system without an external energy supply can deliver an unlimited amount of energy to its surroundings. With a magnet motor, free energy generator wouldn’t work.

Conventional science is quick to say that we cannot pull energy from an environmental source but we have been utilizing different forms of environmental energy such as hydroelectric power, solar panels, tidal power systems, and geothermal energy systems.

What is Free Energy?

Free energy is a thermodynamic quantity equivalent to the capacity of a system to do work. We can obtain energy from sources that do not require an input that we have to pay for such as other forms of energy including fuel, oil, and coal. Free energy is what we can find from our local environment and use without having to suffer costs. Conventional science is out of date and needs to be upgraded to reflect our society. We utilize free energy in different ways and we do not require a paid source of energy.

Magnetic fields pull and push electrons in objects near them to make them move. When a magnet is moved quickly through a coil of wire, the electrons will move and make electricity. Electromagnetism is the combination of electricity and magnetism. Spinning magnets can cause an electric current to begin to flow and create free energy.

What are Permanent Magnets?

Permanent magnets, on the other hand, are magnets that retain the magnetic properties even in the absence of an inducing field or current. These magnets create their own magnetic field that is persistent and continuous. They provide continuous power if the magnets are arranged in such a way that the lines of the magnetic flow are no longer symmetrical and can provide a useful directional force.

The permanent magnets reach the electromagnets and the electric power is then fed to the windings and can overcome the backward pull that could potentially hinder the drive shaft’s rotation. When that power is cut off, the EMF pulse is captured and use to continue to charge the battery. Finally, additionally mounted pickup coils can generate more power with extra currents.

rotation. Instead of using electromagnets like in the Adams Motor, he uses permanent magnets.

The magnetic energy that is used to run a motor over time does not require an outside energy source to generate electricity like the sun or water. It is running purely on the magnet arrangement. However, over time, the magnets can lose their magnetism, so they will have to be replaced at some point to continue to generate electricity. The biggest problem we are facing is trying to figure out exactly what type of magnets would work best for this free energy source.

Magnetic energy will never be 100% free. There will always be some maintenance or startup costs involved, such as when the magnets will need to be replaced. The point of the magnet motor is to provide an alternative energy source so that we do not have to solely rely on fossil fuels. The magnets are also not doing harm to the environment. The biggest issue is going to be the cost of the replacement magnets.

A magnet motor energy generator works, but the science behind this revolutionary concept needs some more developing and work through to become a reliable energy source to reduce our dependence on fossil fuels.

Your yard looks alright, but it’s missing something. Right now, it’s just average. You want it to be spectacular.  You’ve come to the right place. Below, we’re going to provide you with nine tips for yard maintenance. Once you’re through with these, you’ll have the best-looking yard on the block! 1. Update Your Mailbox You…

It’s every business owner’s worst nightmare: an overflowing drain that floods carpeting, furniture, and other fixtures with dirty wastewater. Not only are you wasting water, but your next high water bill will be paired with costly plumbing repairs and water restoration! When you take the time to prevent clogs and leaks in advance, you save…

Your 5-Step Guide to Cleaning a Chicken Coop Properly

Having chickens can be an excellent and productive relationship, but do you know how to clean a chicken coop properly? Depending on how your enclosure is designed (check out these awesome layouts at Organicchickenfeed.com), it can be daunting trying to figure out how to clean each of the living areas in the coop. If you…

Someone Broke My Car Window, What Should I Do? A Guide

The pandemic has come with a lot more repercussions than meets the eye. For example, vehicle break-ins have spiked all across the country these past few months.  Being the victim of a car break-in can be scary, as well as a big inconvenience to your daily plans. However, there are specific steps you can take…

An eco-friendly makeover for your home is an excellent way to reduce your carbon footprint—but make sure your approach is a true “green” approach! Your heart and intentions can be in the right place, but it’s easy to make some common mistakes when trying to choose eco-friendly renovations for your home. In some cases, the…